Tell us about yourself. What do you do at the Wilmette Historical Museum?

I am the director of the museum. We're a pretty small staff, so as director, I wear a lot of hats. I am responsible for administrative things like hiring and budget, cataloging new collections, and contacting speakers and organizing events. I also contribute to tours and school programming, work with our curator on exhibitions, and coordinate our wonderful group of volunteers.

I have a background in Anthropology, and prior to coming to Wilmette Historical Museum 25 years ago, I worked in larger museums and libraries, including Chicago Public Library and the Field Museum.

Chicago Collections is thrilled to have representative institutions both large and small to join and help tell Chicago’s story. How did the Wilmette Historical Museum hear about the CCC and what compelled you to join?

I was on the Chicago Collections Consortium email list a few years ago and heard about the Annual Meeting, so I decided to attend. I was interested in the work of the Consortium and knew the Wilmette Historical Museum would have a lot to benefit and contribute, but for a smaller, suburban museum, the commitment seemed like a stretch. We had the money in our budget this year and decided to give it a try.

So far, Wilmette is represented in EXPLORE with 71 digital images and archival collections from institutions such as UIC and the Chicago History Museum. How will the Wilmette Historical Museum’s collections build on what’s already there?

The suburbs have an interesting history, especially as it relates to growth, expansion, and immigration in Chicago. Many of the Chicago museums focus on urban life, so we are excited to join the consortium and share pieces of the region's history that don't get as much coverage elsewhere.

We have a large collection of photographs (roughly 12,000 images) that we would love to begin digitizing and making available on EXPLORE. They go back to the mid-nineteenth century, with the bulk of the collection from 1890 forward. They are mostly of people, businesses, streetscapes and the lakeshore.

We have a lot of interesting photographs relating to Gross Point, which was largely a German-American immigrant farming community that merged with Wilmette in 1924. The photos we have in that collection (mostly of farms and businesses and the families who worked them) help tell the story of immigration in Chicago.

What collection are you most excited to share on EXPLORE in the future?

A little-known fact about Wilmette is about the history of No Man's Land, which was a little section of the lakeshore that was considered Unincorporated Cook County. No Man's Land was under different jurisdiction, and as such, had more liberal rules on gambling and nightlife. This was worrisome to many Wilmette residents, who wanted to do away with potential rowdiness and crime. Wilmette tried for years to annex the land, but for one reason or another, the courts denied them. Finally, in 1942, Wilmette succeeded in gaining control of that land.

Do you have any upcoming exhibitions we can look forward to?

We're currently working on an exhibition on Gross Point saloons and the temperance movement, which will include some items from the No Man’s Land collection. If anyone has an interest in bars, saloons, or tavern history in general, they should stop by the Wilmette Historical Museum this fall to see it in person!

By: Lauren McKeen, member of the Chicago Collections Communications Committee and librarian at Northwestern University Libraries 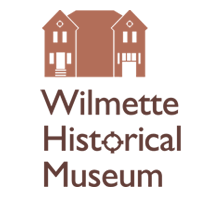