CZS is one of Illinois’ largest cultural institutions and the 5th largest zoo in the country. The Chicago Zoological Society was chartered on February 21, 1921 and Brookfield Zoo opened in 1934, in large part thanks to the generous donation of 83 acres of land by Edith Rockefeller McCormick in 1919. Her dream was for a new modern zoo to be constructed with bar less enclosures in naturalistic settings, like zoos she had seen in Europe. Her philosophy was that the zoo would be a teaching laboratory engaged in scientific research that promoted guest education about the psychology of animals. The Society built on this dream today in its mission to inspire conservation leadership by connecting people with wildlife and nature. 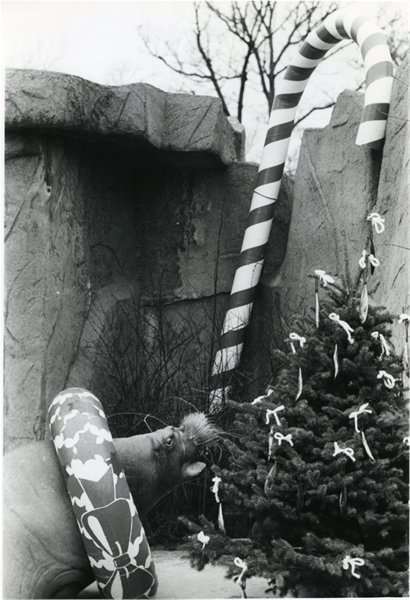 The Brookfield Zoo Library & Archives is primarily a zoological research facility with an extensive archive that begins with the early zoo history from 1919 and continues through the present day. It is accessible to all people— zoo visitors, visiting scholars, volunteers, docents, teachers, school children, CZS Advanced Inquiry Program graduate students and employees— in need of resources and information. The Archives house a variety of materials from its early history including an extensive photograph and slide collection from the construction of the zoo, its opening, and scientific photographic representation of its early animal collections.

Hallmark moments in CZS history are represented in the Archives.  Early zoo construction features photographs of prominent Chicago architect Edwin H. Clark’s zoo structures.  He designed the zoo’s physical layout in the early 1920s and the elegant Art Deco buildings during the 1920s and 1930s. The photograph collection showcases the animals over time including the many firsts of the Chicago Zoological Society like Su-Lin the first panda to be exhibited in North America, first black rhino born in captivity, first okapi born in the United States, and first Southern hairy nosed wombat born outside of  Australia to name a few.

In total, CZS has over 250 cataloged archival boxes that contain early zoo documentation and correspondence from the all departments; including the presidents, directors, zoo departments, and important Chicago figures like Stanley Field, who supervised the building of the zoo as chairman of the Buildings Committee from 1927-1962. The history and advances of CZS are well-documented in its extensive collection of photographs, slides and large format negatives. In addition to these resources, CZS also holds a large collection of zoo ephemera including promotional materials over time and objects such as souvenirs, uniforms, buttons, badges, postcards and guidebooks.